One of the most frequent questions we receive is “where is Hokkaido?” At first glance, it’s a pretty simple question. Hokkaido is the second largest and northernmost island of Japan, it’s largest prefecture. Hokkaido is known for beautiful landscapes, mesmerizing snowfall, and (of course) its delicious assortment of fresh grown fruit. It’s where, in 1999, Takashi-san discovered that the “ugly” fruits from these harvests were being thrown away, despite maintaining their mouthwatering flavor. Upon this revelation, a concept was born: look beyond what meets the eye. This ideal would lead Takashi-san to become one of Japan’s great fruit beer pioneers.

While our brewmaster was scouting potential breweries, he made quite the fateful encounter. As Takashi-san stood behind a small fishing port, he was approached by a dark and brooding cat with piercing yellow eyes. Every time that Takashi-san returned, this outcast re-appeared as well. As time passed, something strange began to happen: with each visit, the cat came closer and closer, slowly revealing his true friendly nature. What first appeared as a solemn, ominous creature eventually became a symbol of Takashi-san’s passion: look beyond what meets the eye. Takashi-san soon took this cat as a “business partner” and made him the brewery’s official icon.

On second thought, “where is Hokkaido?” is a bit more complex. Hokkaido is where a brewmaster can take disregarded harvests and craft them into delectably refreshing, wonderfully flavorful fruit beers. It’s a place where a mysterious cat from a local fishing port can eventually become a lifelong business partner. It’s where a cool, crisp port breeze can lift the weight of the world off your shoulders and invite you to enjoy life’s simple pleasures. Hokkaido is where you can look past what meets the eye and see the amazing potential in everything that nature has to offer. Hokkaido is fresh. Authentic. Unforgettable. 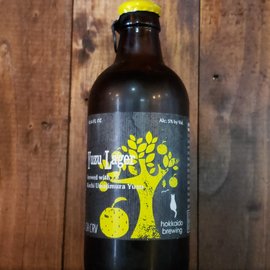